Difference between revisions of "Bismuth"

A brittle metallic element occurs as a native element and as sulfur, oxide or carbonate minerals. Although bismuth was known as a metal as early of the 15th century, it was not isolated until 1737 by Hillot. Its concentration in the earth's crust is 0.2 ppm. Bismuth occurs in Saxony and Bolivia and is found in other areas often associated with Lead, Copper, Cobalt, Nickel and Tin ores. Bismuth is a grayish white lustrous metal that is oxidized by air. Since it is a poor conductor of electricity, bismuth is used in fuses where an electrical surge melts the metal and breaks the circuit. Currently bismuth salts are used in cosmetics and medicine. Metallic bismuth is added to alloys to improve machinability. It is also used in semiconductors and to make the pigment bismuth white. Bismuth is opaque to x-rays and is used in fluoroscopy. Historically, metallic bismuth was used as a dark gray decorative pigment and metallic paint ground on small boxes (Gold 1998). As a ground, powdered bismuth in a gum arabic binder was probably applied to chalk grounds then burnished to form a reflective surface. Powdered bismuth was also mixed with albumin or glue to form 'silver ink'. Bismuth alloys have low melting points and are often used in fire-detection devices. 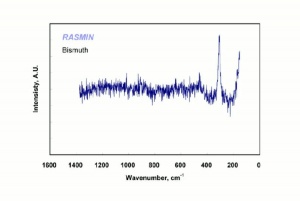 Powder is flammable. Contact and inhalation may cause mild irritation. Ingestion may cause black spots on gums. Bismuth salts are poorly absorbed.