A former brand name for a hard, square-shaped, colored drawing stick. Conté crayons were developed by Nicholas Jacques Conté just before the turn of the 19th century. Originally the wood-encased crayons contained graphite and clay (see Graphite pencil). Soon after other pigments, such as lamp black, sepia and chalk were added for color variations. Currently, small amounts of organic binders, such as fatty oils, are added to some Conté crayons giving them a slightly greasy feel. Conté crayons produce produce a thick dense line. They have been used for lithography and artistic drawings. Since the lines abrade and smear readily, they are often sprayed with a fixative. 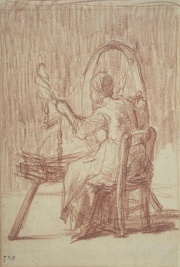