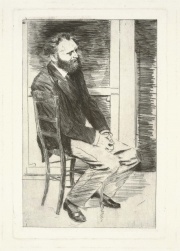 An etching method prepared by scratching a design directly onto a copperplate with a sharp-pointed tool. Drypoint prints characteristically have a fuzzy appearance due to the burrs and ridges along the engraved lines. Initially used in the late 15th century by artists such as Dürer, the technique was replaced by mechanized printing but regained some popularity by the 19th century.