Difference between revisions of "Dyer's broom" 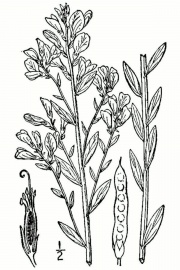 A yellow dye obtained from the flowers, leaves and branches of a small shrub (Genista tinctoria) native to Europe and Asia. Dyer's broom was used as a yellow dye on wool since prehistoric times. Up to the 17th century, dyer's broom was one of three yellow fabric dyes used Europe. The primary colorant in dyer's broom is genistein. It produces a strong yellow color with an alum mordant. Often woad was overdyed on the dyer's broom to produce a yellowish-greenish color known as Kendal green. In the United States, the name dyer's broom has also been used for the broomsedge plant.

Genistein is soluble in water, ethanol, ether and alkalis.