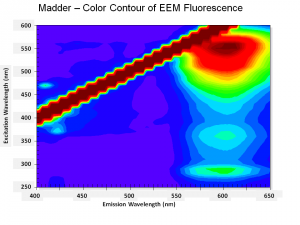 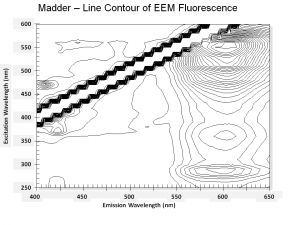 A natural red dye extracted from the roots of any of several species of the genus Rubia. The most commonly used plants include: Rubia tinctorum L., native to the Middle East and eastern Mediterranean, but cultivated across Europe and introduced into the Far East, America, and Africa; Rubia cordifolia L., native to India and southeast Asia, but very widespread; and Rubia akane Nagai, found in Japan and also China, Korea and Taiwan. Madder has been used as a colorant for dyeing textiles since ancient times in India, Persia, and Egypt. Its cultivation and use then spread across the Mediterranean regions and into Europe: it was well known in Classical Greek and Roman times as both a dye and a pigment. Its use continued in Europe thereafter, notably for dyeing Wool. From the 13th century it was cultivated in France, parts of Spain, northern Italy and notably the Netherlands (Zeeland) and was of great economic importance. The dye was also used for lake pigment preparation, but in 15th–17th-century Europe it was commonly obtained from dyed textile (usually wool), rather than from the root directly. The lengthy and complicated method of dyeing the vivid red colour on Cotton known as Turkey red, first seen in Europe on printed cottons imported from India in the 17th century, only became known in western Europe in the second half of the 18th century, but the color quickly became extremely popular and the cultivation and use of madder became an important industry, particularly in France. During the first half of the 19th century, research was carried out to isolate and identify the constituents of the dye, and also to improve the yield of dye from the root. The most important constituents are alizarin (red) and Pseudopurpurin from which Purpurin (red) is formed by decarboxylation (or, in treated roots, acid hydrolysis); other constituents present in the fresh or dried root include Rubiadin, Munjistin, lucidin, Xanthopurpurin, and others. Alizarin and pseudopurpurin are present in the root as glycosides (sugars) and treatments with acid or by fermentation were devised to hydrolyse these sugars to increase the quantity of free alizarin and purpurin available. The derivatives produced included Garancine and fleurs de garance (flowers of madder). Kopp’s purpurin, widely used in the latter part of the 19th century for making madder lakes, was prepared by extracting madder root with sulfurous and sulfuric acids; it contains largely pseudopurpurin and purpurin. The dye is extracted from the dried, powdered root when it is heated in water, but the dyestuff composition is affected by temperature and the extent to which the sugars have been broken down; many dyeing and pigment-making procedures are carried out at quite low temperatures. Aluminum lakes of dye extracted from the madder root or from a madder derivative were popular artists' pigments in the 19th century: for example Rose madder were used as artists pigments. Madder forms a bright red color when precipitated on an amorphous hydrated alumina substrate, such as Alumina trihydrate. Tin, chromium, and iron mordants can produce purple, brown, and pink colors, respectively. After commercial introduction of the synthetic alizarin in 1871, the use of the natural product for textile dyes declined rapidly, though natural rose madder was, and still is, used as a lake for artists' colors. The presence of pseudopurpurin along with alizarin has been used to distinguish natural madder dyes from the synthetic alizarin dyes. Pseudopurpurin and purpurin fluoresce a bright yellow-orange while alizarin produces a pale violet color.

May cause some allergic reactions. May discolor with alkaline treatments