Difference between revisions of "Marcasite"

A grayish-yellow mineral composed of Iron disulfide. Marcasite has a different crystalline form than Pyrite, also FeS2. The opaque mineral grows in serrated, spear-shaped twin crystals that resemble a cock's comb. It is more brittle than pyrite and often crumbles due to its unstable crystal structure. Marcasite can undergo 'pyrite decay' in which a specimen turns to white dust. The dust often reacts with moisture in the air to form Sulfuric acid, which in turn can be deleterious to surrounding materials. Marcasite is mined in India, Turkey, Russia, the Czech Republic, Germany, England and the United States (Illinois). Marcasite has never been used as a gem but pyrite has many times been improperly called marcasite when it is used for jewelry and costume decoration. 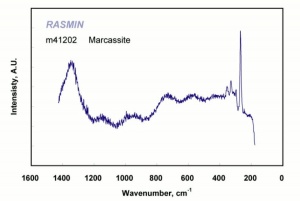 Should be stored in low humidity environment to minimize deterioration. Can produce sulfur dioxide or sulfuric acid.