Difference between revisions of "Mezzotint" 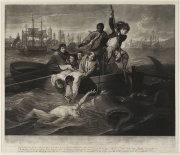 An intaglio process that was invented in the middle of the 17th century. A metal plate is prepared using a rocker to cover the entire surface with an even, toothy texture to hold ink. A design is drawn by smoothing out the burr with a burnisher. The burnished areas will hold less ink and appear lighter, whereas the untouched sections will print very dark. Mezzotints are characterized by a velvety matte surface.