Difference between revisions of "Moonstone"

An opalescent orthoclase feldspar group mineral (sodium potassiuim aluminum silicate) that is used as a gemstone. Moonstones are semitransparent or translucent stones that are usually a milky white with a pale blue luster. Occasionally other colors, such as white, gray, orange, pink, yellow or pale green are found. Their name is derived from a visual effect caused by light diffraction within a micro-structure of regular feldspar layers (lamellae). Moonstones have a hardness of 6 to 6.5 but they are fragile because they cleave readily along the lamination axis. Usually cut as a cabochon, moonstones were used in Roman jewelry from about 100 CE and were popular in 20th century Art Nouveau jewely. Moonstones are mined in Myanmar (formerly Burma), Sri Lanka (Dumbara District), and India. They are found in potassium (orthoclase) feldspars, while plagioclase feldspars produce sunstones. Iridescent sunstones, such as from peristerite and labradorite, are sometimes called moonstones. 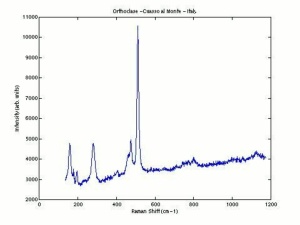 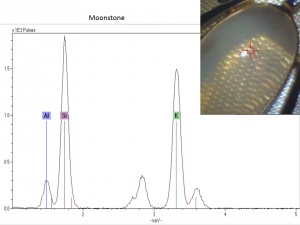