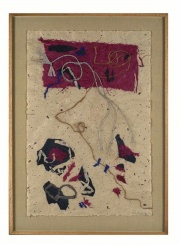 Deciduous trees belonging to the mulberry family (Moraceae, genus-Morus) are widely found in all temperate climates. These flowering trees produce a milky latex sap and an edible fruit. The white mulberry, Morus alba, is native to Asia and grown in Europe. Its leaves are used as a food supply for silk worms. The roots of the white mulberry and others, such as the Osage Orange mulberry, produce a yellow dye used for coloring prints. The red mulberry, Morus rubra, native to North America, has hard reddish brown wood with an uneven texture and silver graining. It is a rot resistant wood that is used for fence posts, window sills, window frames and shoe lasts. The fruit from the red mulberry has been used for a dark red to purple dye. The colorant is an acid base indicator that turns red in acids and blue in bases. See also Paper mulberry.