Difference between revisions of "Paper"

A thin, man-made sheet of matted Cellulose fibers. Paper sheets are molded from a slurry of macerated fibers. The technique for making early handmade paper from vegetable fibers was patented in 105 CE by Ts'ai Lun in China. Ancient Egyptians made Papyrus from coarse fiber strips of the paper reed plant. The first European paper making mill was established about 1085 CE in Spain. Paper is made from a variety of cellulose sources, such as Grass, Linen, Cotton, Wood, Paper mulberry, Straw, Bagasse, Esparto grass, Bamboo, and Jute. Paper is used for writing, printing, drawing, wrapping, and covering walls. Good quality paper contains a high proportion of cellulose, such as those made from cotton or linen rags. Poor quality paper, such as produced by mechanical pulping of wood chips, contains one or more of the following: Lignin, residual Chlorine from bleaching, or excess Alum from sizing. Each of these components increases the acidity of the paper leading to the decomposition of the cellulose fibers. 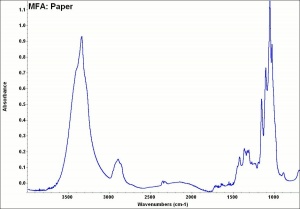