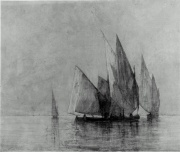 A tool for drawing and writing on paper. The first picture showing a Lead pencil appears in a 1565 woodcut as an ornate wood tube holding a tapered lead stick. The early lead pencils contained soft metallic Lead points encased in Wood shafts. The marks were easily erased from Parchment with Bread eraser or a soft Leather cloth. In the mid 19th century, the Graphite pencil became more popular. The shafts of graphite pencils are made from Graphite mixed with Clay. However, the earlier name of lead pencil transferred and, though incorrect, its use continued. Drawing pencils are available in several grades of hardness depending on the relative concentrations of clay, binder and graphite. 9H contains the most clay and is the hardest, while 6B contains little clay and is very soft. Standard writing pencils are graded on a scale of 1 (soft) to 4 (hard).