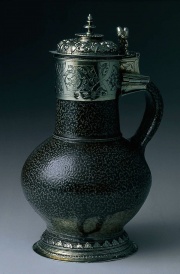 A glassy ceramic glaze with a pebbly texture. First made as early as the 12th century in Holland and Germany, salt glazes are produced by a vapor-phase formation of sodium silicate on the clay surface. An unglazed vessel is placed in the kiln and heated to the optimum temperature (about 1200-1250C), then common salt (sodium chloride) is thrown into the fire. The salt vaporizes and reacts with steam to produce sodium oxide which then reacts with the silica in the clay body to form sodium silicate. Salt glazes are very hard and durable. They have been used on stoneware crocks, masonry units, and terracotta sewer pipes.

Hydrochloric acid is a by-product of the reaction.