A Leather with a rough, granulated surface. Shagreen was originally made in the near East from donkey, mule, or horse skin. It was artificially grained by pressing small, hard goosefoot seeds (Chenopodium album) into the surface. The skins were trampled then left in the sun to dry. The embedded seeds formed indentations in the dried skins while the seed oils aided in the tanning process. By the late 17th century, the name shagreen was also used for galuchat, tanned skins from sharks and rays, probably because both had a pebbly surface and were often dyed green. Shagreen leather was used for clothing, boots, sword hilts, pistol covers, and book bindings. 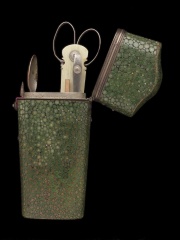