A gelatin-like, polysaccharide substance extracted from various species of red Seaweed, belonging to the Rhodophyceae class, that grow in the Pacific and Indian Oceans and the Japan Sea. According to legend, agar was first discovered in the mid-17th century in Japan. Agar contains agarose and agaropectin. Agar is available in dried cakes, coarse granules, long strips and thin sheets. It is strongly hydrophilic and can absorb over 20 times its own weight in cold water. Agar dissolves in hot water and forms a stiff, clear jelly upon cooling, even at concentrations as low as 0.7%. However, when agar films are desiccated, they shrink significantly. Most commonly used as a media for culturing bacteria and fungi, agar has also been used for sizing textiles and paper. It is an important emulsifying agent in foodstuffs, photographs, dental mold materials, cosmetics, and adhesives. Agar was also used to make an experimental synthetic gauzelike fabric in England. The primary commercial sources for agar are Japan, New Zealand, Australia, Russia, and the United States. 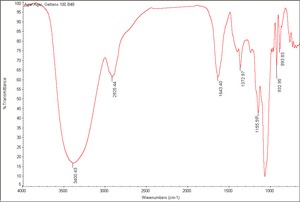