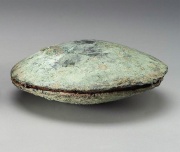 A cereal grain obtained from the barley plants, Hordeum vulgare (6-rowed) or Hordeum distichon (2-rowed). Barley was cultivated in Ethipia and southeast Asia since prehistoric times. From biblical times through the Middle Ages, barley was the primary grain for producing unleavened bread and porridge throughout Europe, the Middle East, Egypt, and some parts of Asia. The grains are also been used to make malt beer. The residual stems, or straw, were used in Europe and Asia to make straw hats. The straw has also used used as a packing material, particularly for shipping glass and as an animal feed.