A fine, natural Clay formed from the decomposition of Glass particles in volcanic ash. Bentonite is composed primarily of Montmorillonite. It was named for Fort Benton, Montana, near which it was discovered. Significant deposits have been found in Greece, Japan, Italy, Brazil, Romania, Germany, Mexico, Argentina, Spain, India, Hungary, Poland, Canada, Turkey, Cyprus and the U.S. (California, Montana, Wyoming, Texas, Arizona, Colorado). The light cream to black color aluminum silicate clay retains the texture of the volcanic glass. It occurs primarily in two forms: sodium bentonite or calcium bentonite.

- Sodium bentonites absorb large quantities of water, swelling to about 20 times their original volume to form a jelly-like paste that is smooth like soap. Sodium bentonites are used to increase the plasticity of a ceramic clay body, as emulsifiers in portland cements and concrete, as fillers in insecticides, soaps, paper, and paints; and as a water softener to remove calcium from hard water.

- Calcium bentonites are nonswelling and break down to a finely granular aggregate. They are used as an absorbent clay called Fuller's earth. 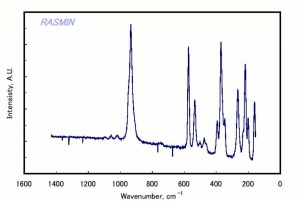