Difference between revisions of "Calfskin"

A fine-grain Leather made from the hide of a calf. Milk-fed calves have a softer, smoother skin than cattle that have eaten grass and they sometimes have fat wrinkles that cannot be removed by tanning. Calfskins are usually vegetable tanned or chrome tanned. The strong durable leather was commonly used as a bookbinding leather from 1450 to 1800 (Roberts and Etherington 1982). Currently, calfskins are primarily used for shoe uppers, handbags, and gloves. Calfskin that has been waxed is called French calf. Russia calf was tanned with Willow bark and rubbed with Birch bark oil. 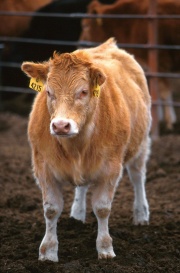