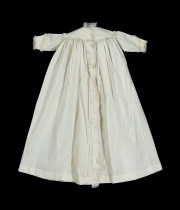 A smooth, lightweight, plain weave, white fabric. Cambric originated in Cambrai, France as early as 1595 and was used for Church embroidery and table linens. The soft fabric is made from fine threads of linen and occasionally cotton. It has good body and is often calendered on one side to produce a smooth surface. Cambric is used for handkerchiefs, dresses, underwear, and linings.