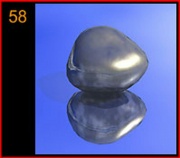 A rare earth element. Cerium has an abundance in the earth's crust of 46 ppm. It is found in the minerals cerite, bastnasite, and monazite. It was discovered in 1803 by Baron Berzelius, a Swedish chemist. Cerium is a gray ductile metal that is very reactive. It is used in metal alloys to increase creep resistance, and add strength. It also serves as a getter to remove traces of oxygen. oxide Ceric oxide is used as an abrasive, catalyst, and as an ingredient in glass and glazes.