A natural mixture of two or more cobalt oxides. The most common forms of cobalt oxide are: cobaltous oxide (CoO), cobaltic oxide (Co2O3), and tricobalt tetroxide (or cobalto-cobaltic oxide, Co3O4). The latter contains cobalt in both valences and comprises up to 40 percent of the commercial cobalt oxide used in the manufacture of ceramics, glass, and enamel and in the preparation of catalysts and cobalt metal powder. Cobalt oxide was used as a blue colorant in ceramic glazes and underglazes since at least the 8th century in the Middle East. It became very popular in the 14th century when it was used for Ming Dynasty ceramics. 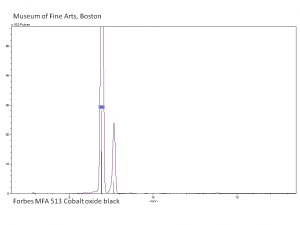