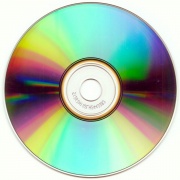 An Optical disk used as a storage medium for digital data. Compact discs were originally developed for audio recordings through the combined efforts of Philips Electronics and Sony Corporation. First sold in 1982, a CD can produce up to 74 minutes of high fidelity sound. The compact disc (CD) is composed of a flat, circular, Polycarbonate substrate (12 cm diameter, 1.2 mm thick) coated with a reflective Aluminum layer and a thin acrylic lacquer. The acrylic coating protects the imprint from abrasion and corrosion. The data layer is pressed into the plastic by a stamper during the injection molding process. This imprinted digital pattern is read by a laser scanning the surface. Later computer readable compact discs were developed for storing data, images and software (up to 680 megabytes). Read only memory CD's (i.e. CD-ROM), are identical in appearance to audio CDs, but they must be read by a computer. In more recent recordable CD's (CD-R), a thin layer of a transparent organic dye covers the reflective metallic layer. The recording laser selectively melts pits in the dye to make it opaque and thus the reading laser will not be reflected back in these regions. These dye impregnated discs may be susceptible to light damage. 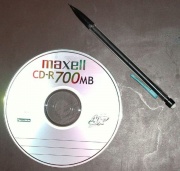