A type of glass whose surface is covered with a pattern of fine cracks. Crackle glass, or ice glass, was first produced in Venice in the 16th century. There are two methods for production. The first involves dipping the hot glass into cold water to produce the cracks then reheating just enough for working. For the second method, small broken pieces of glass are picked up with the molten ball, then worked into the final form. Ceramics with a crackle pattern in the glaze are called crackleware. 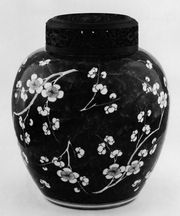