Difference between revisions of "Elvacite"

[Lucite International] A registered trademark for a series of polymers composed of ethyl or butyl methacrylate resins. Previously called Lucite® resins, these acrylics were tried as picture varnishes in the 1930s and 40s because they were resistant to yellowing. However subsequent testing has shown that the butyl methacrylates crosslink when exposed to light and become 50% insoluble after 22 years (Feller, 1971). Additionally Elvacite® 2044 has a low glass transition point, which makes it soft and susceptible to dirt collection. 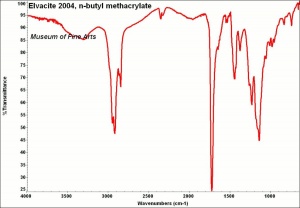