Difference between revisions of "Fuchsin"

A synthetic aniline dyestuff that is also called Magenta. Magenta was the second synthetic dye material to be produced from coal-tar derivatives. It was first noticed by Natanson in 1856. Then in 1859, Verguin patented a large scale production method for making magenta by oxidizing crude Aniline with Stannic chloride, a tanning solution. Magenta is a dark green water soluble powder that oxidizes to forms a deep red, light-sensitive dye. Fuchsin is used to color textiles and leather and to stain bacteria. Magenta was formerly used in watercolor paints but has since been replaced by colors with better lightfastness properties. 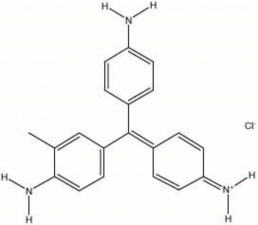