A dense, white, opaque powder often used as a pigment. Titanium dioxide occurs naturally in three crystalline forms: anatase, rutile and brookite. It is a very stable compound with a high refractive index. A pale yellow titanium dioxide pigment was prepared from ground rutile as early as 1870. Synthetic titanium white (anatase form) was first prepared in 1908 in Niagara Falls, NY. Commercial manufacturing of the pigment began in the U. S. (Titanium Pigment Corp.) in 1916 and in Norway (Titan Co.) in 1918; by 1920, the two companies signed an agreement to cross license the product prepared using the Norwegian patent (Laver 1997). The pigment was sold under the name of Titanox and contained 25% titanium dioxide co-precipitated with 75% barium sulfate. Both pure titanium and barium base titanium pigments have a very fine texture. The anatase form of titanium dioxide was a common white pigment in the early 20th century. Once the first commercially viable method for producing rutile was developed in 1938, production shifted to rutile because white paints with anatase pigments were subject to chalking and yellowing. Currently, titanium pigments are usually sold as admixtures with zinc oxide. In addition to paints, titanium dioxide is used as a pigment in paper coatings, textiles, leather, ink, glass, and ceramic glazes. It is also used as an abrasive. Synthetic titanium dioxide (rutile) is also produced as a gemstone crystal by the Verneuil process for use as imitation diamonds in paste jewelry. As a pigment, titanium dioxide has some interesting physical proporties: high refractive index, strong ultraviolet radiation absorption capability, whiteness, brightness, opacity & covering power. It was introduced in its artists' colour pallette by Winsor & Newton as early as 1910. Titanium dioxide is also used as a white reference material in many instrument dealing with optical measurement or colour spectrometry. 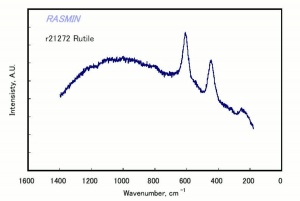