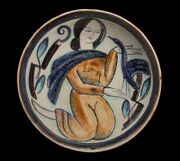 A naturally radioactive metallic element. Uranium was discovered in 1781 by Sir William Herschel and isolated by Klaproth in 1789. It has an abundance of 2.1 ppm in the earth's crust and primarily occurs in pitchblende, coffinite, and carnotite ores. Uranium ores are mined in France, Zaire, Canada, South Africa, Australia, Russia, and the U.S. (Colorado, New Mexico, Utah). Uranium is a silvery white metal that is ductile and malleable. It polishes to a high gloss but tarnishes quickly in air. Uranium undergoes a series of nuclear fission reactions to eventually produce Lead. Because these reactions are used in nuclear weapons and nuclear powder plants, radioactive uranium has not been commercially available since 1944. Uranium salts and depleted uranium oxides are used as mordants for dyes, toners in photography, and pigments in Glass, paints, and ceramics. Uranium oxides produce red and orange colors at about 940 C while slightly higher temperatures give a soft yellow color (Kawai's yellow). It can turn gray or black at temperatures above 1260 C.

Reactive with all metals, water, acids and peroxides. Inert to alkalis.