Difference between revisions of "Pearl" 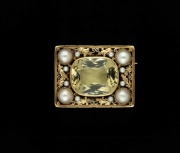 A smooth, opaque, iridescent gem formed as a multilayered Nacre deposit around foreign matter embedded in the shells of mollusks. Nacre is composed of Aragonite crystals bound together with Conchiolin. The nacre is built up in thin, concentric layers that grow at rates of less than a millimeter per year. Large, natural pearls a rarity with the largest known pearl weighing 93 grams. The shape of the pearl depends on the shape of the embedded inclusion so most natural pearls are not spherical. Salt-water pearls, also called Oriental pearls, are found in the Persian Gulf, Gulf on Mannar, Myanmar, Tahiti, Borneo, New Guinea, Venezuela, and Australia. Since 1920, pearls have been cultured commercially.

Easily damaged by acids. Deteriorates at low humidities. Easily scratched. May be discolored by soap or skin oil.