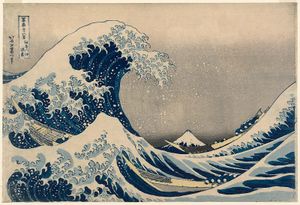 Prussian blue ベロ藍 (beroai): The first modern synthetic pigment, Prussian blue was an accidental discovery made around 1704–6 by chemist Johann Jacob Diesbach with the help of alchemist Johann Conrad Dippel. Composed of ferric ferrocyanide, this synthetically produced pigment yields a vivid blue. Due to its high cost as an import from the West during the 1800's, it was used initially for paintings. By the end of the 1820's, this pigment was produced in China, thus making it affordable for use as a colorant for woodblock printing.

Prussian blue's bright, intense “true blue” color, fine particle size, and high tinting strength soon made it an indispensable addition to the printmaker’s palette, largely supplanting dayflower and indigo. This enabled an even, sharp printing as well as a greater range of tones especially when printing graduated color. It is thought that the introduction of this colorant into the printmaker’s palette stimulated Hokusai and Hiroshige to design the iconic landscape for which that they are celebrated. Prussian blue is both lightfast and stable to moisture.

Below is a list of prints where Prussian blue was detected.

The following 10 pages are in this category, out of 10 total.