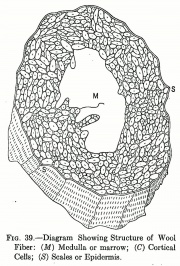 The inner core of a cellular structure. In plants, the medulla is composed of vertical bands of tissue between the pith and the bark. The fiber receives nourishment through the medulla. In animal hair, the medulla forms one to six parallel rows of air spaces in the central core. When the length of a hair or fiber is examined microscopically, the pattern of cells in the medulla is characterized as either continuous, intermediate or discontinuous depending on whether they are interconnecting or separate. Additionally a continuous medulla can be further subdivided as either nodose (irregular outline) or homogeneous (smooth outline). The medulla of some hairs, such as squirrel, are discontinuous at the tip, but continuous at the base.