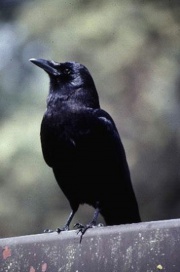 Any of several black-feather birds of the family Corvidae found throughout the world. Crows range in size from the large raven (Corvus raven) to the smaller jackdaw (Corvus monedula). The common crow (Corvus brachyrhynchos) is native to North America. The carrion crow (Corvus corone) and rooks (Corvus frugilegus) are native to England as well as north and central Europe. Crows feed on seeds, berries, insects, earthworms, larvae, and sometimes carrion. They are considered to be the most intelligent of all birds and have complex, hierarchic societies.