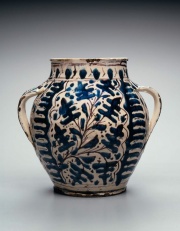 A type of tin-glazed earthenware first produced on the island of Majorca. The technique was transferred to Italy in the 12th century and later spread slowly throughout Europe. Now, even though several similar methods are used elsewhere in Europe (faience, delftware), the term 'majolica' refers only to the tin-glazed pottery made in Italy. The white majolica tin glazes were decorated in blue (cobalt), yellow (antimony), red (iron), green (copper), and purple (manganese). 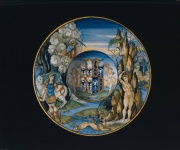