A hard variety of Copal resin found as semi-fossilized specimens on the ground or as exudations on living trees (species Trachylobium such as T. verruscosum and T. mossambinecense), found on the island of Zanzibar and areas of nearby African mainland. The most valued pieces are fossilized specimens from trees that are no longer living. Zanzibar copal is a very hard, smooth and shiny resin that is used to make a dark oil varnish. Some specimens of Zanzibar copal are misrepresented as amber. 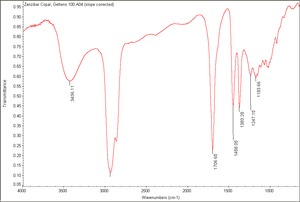