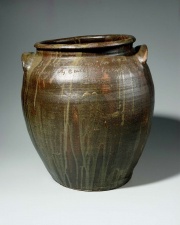 A Ceramic glaze that has an alkaline flux, such as Borax, Potash, or Soda ash (Mayer 1969). Alkaline glazes can produce brilliant colors, such as Egyptian blue, using low temperature firing. However, the alkali materials are often hygroscopic resulting in lumpy, poorly dispersed suspensions. In addition, if the composition contains too much alkali, the glaze maybe susceptible to crazing. A typical composition for an alkaline glaze is: Alumina (10-15%), Silica (30-70%), potash (up to 15%), Lime (up to 15%) with variable small quantities of iron oxide, Magnesia, and phosphates (Hodges, 1988). 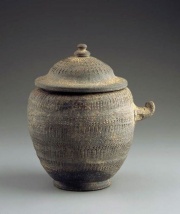