A rare lithium containing fluorophosphate mineral that has occasionally been used as a Gemstone. Amblygonite was first discovered in Saxony by A. Breithaupt in 1817. It is a translucent stone that is usually white or creamy but also occurs in pale shades of yellow, blue, gray, pink, or green. It is found in France (Montebras), Spain (Caceres), Australia, South Africa, Zimbabwe and the U.S. (Maine at Hebron, Connecticut, South Dakota in the Black Hills, California at Pala). Amblygonite is used in small amounts in some ceramic glazes. It is also used as a source for Lithium. 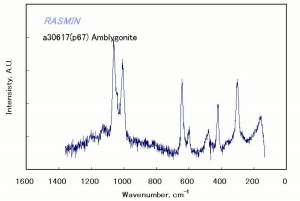