A tall, deciduous tree, Ulmus americana, that grew widely in the eastern half of North America. The American elm was popularly used for lumber prior to the 1930's, and was grown for shade and ornamentation. The hard, tough coarse-grain wood was also used for ship building because it bends well and does not splinter. Dutch elm disease, a fungus carried by the elm-leaf beetle, has systematically killed many of these trees. 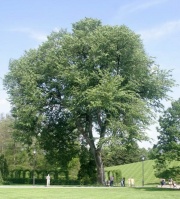