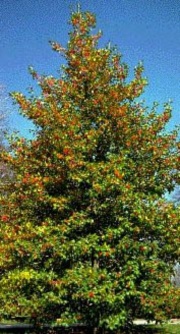 A small evergreen tree, Ilex opaca, with dark-green spiny leaves and bright red berries. The American holly is native to the eastern United States. Holly timber is a creamy white color heartwood with a greenish-gray cast. It has a fine texture with an irregular grain pattern. Holly has been used as a substitute for Boxwood and, when dyed black, for Ebony. It has been used for sculpture, carvings, small articles, musical instruments, piano keys, Veneer, and Marquetry.