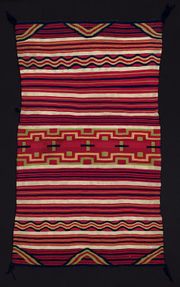 Any of a group of dyes derived from aniline which is a coal-tar distillation product. Aniline dyes were the first synthetically produced basic dyes. The method for the production of Mauve (mauveine) was discovered in 1856 in England by William Perkin. This quickly spawned a new area of research into triphenylmethane dyes from which the second aniline based dye, Magenta (fuchsin), was discovered. By 1861, many colors were being synthesized ranging from yellow to red to blue. These colors are very brilliant but many lack the permanence of inorganic pigments. In spite of this, they are still used in watercolors, inks and fabric dyes. See also Aniline green, Aniline yellow, Aniline brown, and Aniline black.

Most are toxic. Contact can cause irritation to skin and membranes.