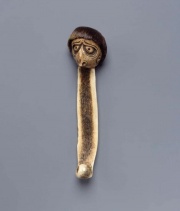 A bony horn that grows on the head of deer, moose, elk, and caribou from the Cervidae family. New antlers are grown each year. They start as soft tissue covered in fur that is called velvet. The spongy, calcareous tissue hardens with time and the deer rub off the protective velvet covering. Antlers are Bone, but have a uniform outer cortex structure with a spongy center core. They are primarily composed of Calcium hydroxyapatite with smaller amounts of Calcium carbonate, Calcium fluoride, and Magnesium phosphate. Antlers also contain about 30% Ossein, a high molecular weight Protein. The hard, but carvable, material has been used since Paleolithic times for numerous small items such as points, harpoons, needles, combs, and axe handles.