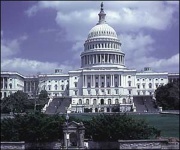 A fine-grain Sandstone cemented with large chunks of clay quarried in Stafford County, Virginia. Aquia Creek sandstone comes in many pale colors such as light gray, pink, buff and beige. Although a popular construction stone in Washington DC from 1790 to 1840, Aquia Creek sandstone was poorly cemented. It was used in the rotunda of the U.S. Capitol, but, because of flaws, much of it was painted or replaced soon after it was installed.