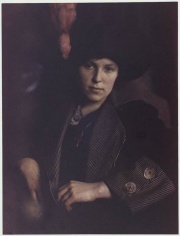 A type of plate formerly used for color photography. Autochrome was the first successful process for color photos. It was developed in 1904 by Auguste and Louis Lumière of Lyon. They manufactured the plates from 1907 to 1933 at which point the plates were replaced by other color film products such as Lumicolor, Alticolor, and Filmcolor (Nadeau 1997). Autochrome plates contained a Silver bromide gelatin photographic emulsion applied over a multicolored screen of tiny Starch grains dyed red, green, and blue. Following World War I, the potato starch matrix was replaced by Gum arabic which gave a more uniform, less grainy appearance.