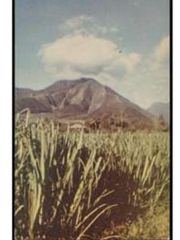 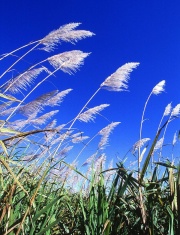 Paper fiber type: Non-woody/grass. Using transmitted light microscopy, fibers are flat and thick-walled with mostly blunt ends. They have the appearance of hardwood fibers. Parenchyma cells are very large, thin-walled and abundant. Heavily pitted long vessels are also present, but may be broken up by pulping. Separated spiral thickenings may be present. Appearance with Graff "C" stain: Dark blue, but varies with bleaching. Average dimensions of fibers: length, 1.7mm; width 20μm. Vessels can be up to 2.1mm long and 200μm in width. Common pulping method: mechanical or soda.