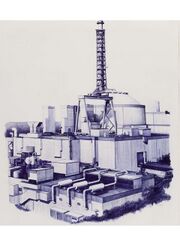 A writing tool composed of a small ball loosely held in a funnel-shaped nib and connected to a tube filled with ink. Friction from moving the ball over paper makes it rotate; its surface is continually coated with fresh ink which is rolled onto the paper. Ballpoint pens were patented in the U.S. in 1888 by Loud, but not marketed successfully until the 1940s.