The black oak, Quercus velutina (not Quercus nigra), has a black or dark brown bark and is native to the Eastern and Midwestern part of the United States. These small, but fast growing trees grow on rocky hillsides and sandy ridges. While the tree is occasionally used for lumber, its most important commercial product is a yellow dye obtained from the trees orange-yellow inner bark. The dye bark was named Quercitron in the late 18th century and brought to Europe as a substitute for Weld dye. The bark also contains tannins that were used in the leather industry. Quercitron contains three colorants: Quercetin, quercetagetin and Flavine. The dye is extracted from the black oak bark with boiling water. The outermost layer gives a bright yellow while the inner bark gives a darker oranges and tans. 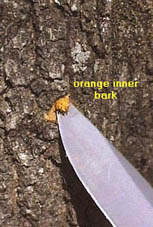