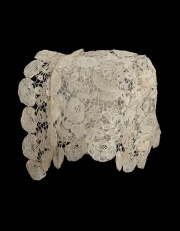 A delicate, and often intricate, hand-woven lace. Bobbin lace was invented by Barbara Uttman in Anaberg, Germany in 1561 and was later widely made in Italy, England, France, Brussels and Ireland. Bobbin lace is still being made by hand in Ireland, Belgium (Kantcentrum) and China. To make bobbin lace, a pattern, often called parchment, is fixed onto a pillow with numerous straight pins. Then the threads, prewound on specially designed spools, or bobbins, are interwoven around the pins using a variety of stitches. As the lace progresses, the pins are moved along the pattern to hold the stitches in place.