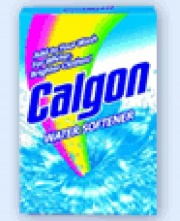 [Reckitt, formerly Reckitt Benckiser] A registered trademark for a family of water softening agents originally composed of metaphosphate sodium hexametaphosphate. Calgon, first marketed in 1918, was a water soluble white powder that sequestered many hard water minerals, such as Calcium carbonate and Calcium sulfate. In low concentrations, it inhibited corrosion of Steel, prevented the formation of scale from water deposits and minimized precipitate formation during dyeing and laundering. Calgon also acted as a Dispersant and, as such, was used with fillers and pigments in paints. It was used in the pretanning process for leathers where it fixed the hides and minimized swelling (in acidic solutions). Calgon was commonly used for laundry, general cleaning, and papermaking. Although Calgon has been useful for removing calcium deposits on archaeological materials, the sequestering of hard minerals may may change the composition of, and thus destabilize, glass, or glazed artifacts. In recent years, Calgon has developed several formulations many of which no longer contains simple phosphates, which are hazardous to the environments. Some examples are:

Soluble in water. Insoluble in most organic solvents.