A colorless, crystalline material. Camphene is a terpene type compound obtained from camphor oil or synthesized from turpentine. Camphene was used as a camphor substitute and as an Insecticide. The name camphene has been mistakenly used as a synonym for Burning fluid, which is a 19th century commercial lamp oil containing a turpentine and ethanol mixture that burned brightly but was potentially explosive. 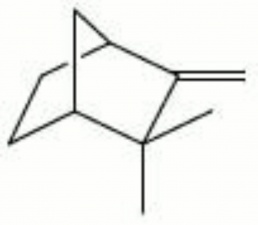