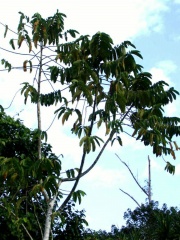 A rubbery exudation obtained from the Castilla elastica tree native to Mexico, Central America and the Caribbean. Castilla rubber was used by the Maya and Caribbeans. Later, when it was cultivated in Panama for exportation, it became known as Panama rubber. The latex and rubber are identical to hevea rubber after purification (Brady 1971).