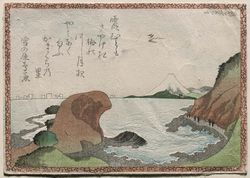 Other Reds: Oranges are commonly seen and created by overprinting a red and yellow colorant or through mixing these colors. Safflower and orpiment appear to be the most common combination.Other combinations of reds and yellows have also been used to create various oranges.

Other combinations detected so far are:

Examples of Other Reds in Ukiyo-e Prints

Below is a list of prints where the various orange mixtures were detected.

The following 26 pages are in this category, out of 26 total.