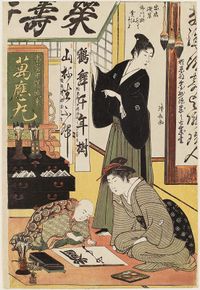 Red lead 鉛丹(entan): The common name for a heavy, opaque, orange-red pigment composed of Lead tetroxide. Although chemically equivalent to the mineral minium, red lead has been synthetically prepared by roasting lead white (480 C) since before the 5th century BCE. Red lead and lead white can discolor and darken when exposed to Hydrogen sulfide.

From early hand-colored prints to nishiki-e or fully printed images, red lead was continously used as a color for woodblock printing. It can appear as a light pink, reddish orange or dark reddish brown in color. The light pink color, often seen in wooden architectural elements is most likely a mixture of red lead with lead white. Like lead white, red lead can darken when exposed to hydrogen sulfide. It is thought that in some cases red lead was intentionally darkened to form a dark gray metallic sheen or patina. In order to create this effect, Acetic acid was likely applied to the printed area of red lead and then exposed to hydrogen sulfide, mostly in the form of rotten eggs.

X-ray fluorescence analysis (XRF) is used to detect lead, which in a red or pink area, is an indication for the presence of red lead (Pb3O4).

Other Images of Red lead

Below is a list of prints where red lead.

The following 23 pages are in this category, out of 23 total.