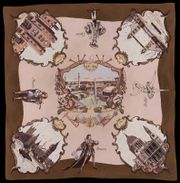 Cellulose acetate resin with more than 92% of the hydroxyls replaced with acetate. Cellulose triacetate was first developed by Schutzenberger in 1865. However, it was a tough hard plastic that contained high amounts of acids and was only soluble in expensive chlorinated solvents. Small amounts of triacetate film were produced by Eastman-Kodak in 1908. Fiber production from cellulose triacetate was not commercially viable until the mid-1950s when economical solvents became available. Triacetate is a durable fiber that is resistant to wrinkles, stains, chemicals, sunlight, insects and moisture. It should not be dry-cleaned but is not degraded by normal laundering. It dries quickly in air or cool driers and maintains its shape without ironing. Triacetate is a crisp, firm fabric that is often used in taffetas and suitings. It is used in drip-dry clothing, tablecloths, skirts and slacks. It is often used in wool blends to increase washability and crease retention.